Mike Miller and Scott Greener tried a case styled Driver vs. Poyner Water Supply to verdict and obtained a defense verdict on liability. The case involved a claim against a water supply corporation for damage to land after the construction of a pipeline in a disputed easement. The Plaintiff alleged trespass and negligence and the case was defended on the theory of implied easement and easement by estoppel.

J.J. Knauff represented an oilfield service company who was sued for in excess of $63,000,000 and was able to obtain a favorable outcome for the client after a ten-day trial. See Heritage Standard Corporation v. Apollo Perforators, Inc., Case No. 10-36484-hdh-11; Adversary No. 10-03417; United States Bankruptcy Court, Northern District of Texas.

J.J. Knauff represented a trucking company at a five-day personal injury trial in Odessa, Texas. The plaintiff sought in excess of $1,600,000 in damages; however, J.J. was able to obtain a defense verdict in December 2011. See Gilman Treviso v. One Source Industrial, Inc.; Cause No. B-128,215; 161st Judicial District, Ector County, Texas.

J.J. Knauff represented an operator in this personal injury suit. J.J. was able to utilize the Fort Worth Local Rules to strike testimony of the plaintiff’s proposed witnesses, which resulted in the plaintiff accepting less money at trial than was offered at mediation. See Johnny Trayler v. Rife Energy Operating, Inc., Cause No. 236-221198-06, 236th Judicial District Court, Tarrant County, Texas.

On January 31, 2013, the Second Court of Appeals in Fort Worth reversed the trial court in part in LIT HW 1, L.P. v. The Town of Flower Mound, et. al., 3013 WL 362760. Murray Joseph Rossini made the oral argument to the Second Court of Appeals In LIT HW 1 in which the court of appeals reversed the trial court in part, agreeing with Rossini that the Board of Adjustments of Flower Mound used the wrong standard when denying our client’s appeal of a building official’s building code ruling. This ruling provides a party who is appealing an adverse building code ruling in the Town of Flower Mound with authority to ensure that the Flower Mound Board of Adjustment uses the correct standard of review.

On December 21, 2012, in another case of first impression, the Dallas Court of Appeals issued a holding regarding the potential preemption of claims made by undocumented aliens and set forth elements for the admissibility of a plaintiff’s immigration status at trial. See Grocers Supply, Inc., et al. v. Jose Luis Cabello, et al., 390 S.W.3d 707 (Tex. App.—Dallas 2012, no pet.) (stating proponent of evidence must show the undocumented alien was in danger of immediate deportation and must establish the effect, if any, such deportation might have on future earning capacity). J.J. Knauff researched and drafted the appellate briefing in this matter and presented the oral argument before the court.

On February 9, 2011, the Waco Court of Appeals held the trial court abused its discretion and granted a petition for mandamus in favor of EOG Resources, Inc. regarding a discovery dispute. See In re EOG Resources, Inc., 2011 WL 455280 (Tex. App.—Waco Feb. 9, 2011) (orig. proceeding). J.J. Knauff researched and drafted the appellate briefing in this matter.

Miller Knauff Law Firm focuses on litigation and is prepared to address almost any legal need. Contact us by completing the information below. Contact does not constitute engagement or representation. 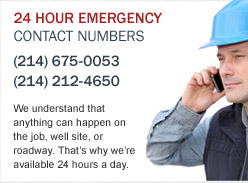